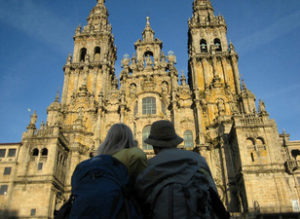 “What brings you joy?” asks Benny as we sat down to another pilgrim’s meal in the bar of a small Spanish village. We shared red wine and fresh bread while waiting for a bowl of lentils and a choice of fish or meat – simple but satisfying after a long day’s walk.
We are modern-day pilgrims walking the Camino de Santiago (or The Way of St. James as it is called in English, the same title of the recent movie starring Martin Sheen) to the cathedral in Santiago de Compostela where it is believed the body of the apostle St. James is buried – just as the first Christian pilgrims had done more than 1,000 years earlier.
The Way is not a single trail – there is a collection of old pilgrimage routes covering Europe, all having Santiago de Compostela in northwest Spain as their final destination.
But the best known is the Camino Frances, starting in St Jean Pied de Port (near Biarritz) in France and finishing nearly 800 kilometres later.
It was the route chosen by Charlemagne, El Cid, Roldan and Suero de Quinones; crossing the north of the Iberian Peninsula, through the rolling hills of the Basque Country, the hot, flat, empty “meseta” of Navarra, La Rioja, and Castilla y Leon, and the green hills of Galicia.
In the Middle Ages the route was highly travelled, but reformation and unrest in the 16th century resulted in a slow decline. The late 1980s, how-ever, saw a sudden rise in interest in the Camino and since then a growing number of modern-day pilgrims from around the globe walk the route; looking perhaps for a road to a new type of spiritualism or a path to personal growth.
It takes roughly 30 days to walk the Camino Frances, at an average of 28 km a day with no detours or rest days and no margin of error for injury. Five weeks is a more graceful time allowance, but still leaves little opportunity for exploration.
Benny is purposeful in his pilgrimage. He studies and writes every day, sharing his thoughts and asking others to share theirs. I, on the other hand, was walking the Camino with no agenda, but was open to what-ever may come along.
In fact, the idea to “do” the Camino was not mine at all, but that of my 26-year-old daughter, who was looking for a “jump start” in life.
We became known as the “Canadian mother and daughter,” but there were other mothers and daughters, fathers and sons, fathers and daughters, and mothers and sons. There were friends, husbands and wives, and many on their own.
But whether walking solo or with someone else, you meet your “self” and find you are never alone – surely a purpose of pilgrimage, perhaps of life itself. People choose to do the Camino for any number of reasons – mid-life cri-sis, a need for a time to reflect, to get “unstuck,” to move for-ward after a loss, or to contemplate a new purpose. They are all ages, all religions, and all nationalities.
It is hard to conceive a safer environment within which to reflect on life and its direction.
The people along the Camino have been welcoming pilgrims for centuries (although one should always take the usual precautions).

We met many for whom this Camino was not their first. One South African woman was a self-proclaimed “Camino junkie,” this being her seventh journey.
The French route includes the major cities of Pamplona, Burgos and Leon, the large towns of Logroño in the Rioja, Astorga, and Ponferrada, and a host of small villages.
The path itself is as varied as the people who walk it. Don’t be fooled by the word “walk” – there is a lot of vertical terrain. The first day from St. Jean takes you through the Pyrenees Mountains, climbing 1,400 metres over 28 kilometres.
It was the 10th day of what would be a 32-day journey for me, and the rhythm and simplicity of Camino life was taking hold – find a bed, shower, massage your feet, wash your socks and enjoy a meal.
Such is the allure of the Camino – just you and your backpack, cut off from the rest of life for a time, being only in the moment.
The weather was unseasonably warm (35 C) for the second week of September. We spent the day walking through orchards of olives, almonds and figs. A few days earlier it was fields of grapevines and corn.
Walking El Camino Frances you follow the sun during the day and The Milky Way at night. Often we would start our day at 6 a.m., the moon still in the sky in front of us and the sun rising to our back.
But I don’t want to romanticize it. I remember every moment of the first 10 days – every hill, every bunk-bed, and every incessant snorer (as you were most often in large bunk rooms of 20 to 100 people). Those days often ended commiserating with others over a cerveza and asking, “Why are we doing this?” At first our packs felt heavy. But you make adjustments and your body adjusts. By the time we reached Galicia, we were “one” with our packs and felt we could run up the hills.
The Galicia scallop shell, once proof of the ancient pilgrim journey, now identifies the modern-day traveller. The familiar yellow arrow – painted on trees, rocks, poles and buildings – guides pilgrims (peregri-nos as they are called in Spanish) along the way.
To stay at pilgrim hostels (albergues) and to receive a compostela (certificate of completion of pilgrimage to Santiago) you need a pilgrim pass-port credential as proof you are a pilgrim and have walked the route. It is a cherished piece of paper, perhaps the most important keepsake of the journey.
Sometimes we walked by our-selves, other times with fellow travellers, everyone having their own pace, but often arriving at the same spot by night. We talked, laughed and some-times sang.
That evening waiting for our pilgrim meal would be the last time I saw Benny, but I did contact him when I returned home with the answer to his question.
“What brings me joy?” Well, Benny, when I walked into Santiago de Compostela with my daughter on Oct. 5, 2011, her face full of pride from such an accomplishment and a knowing look that she was now stronger from her Camino experience, my heart was truly filled with joy.