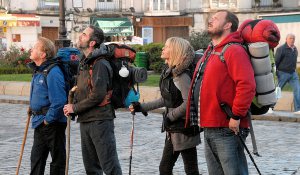 AMERICANS have elected men to the highest office in the land in the hope that they would be tough but fair, regular guys but still presidential. You know, like Josiah Bartlet, who reigned with dignity for seven seasons on “The West Wing” on NBC. During some of the more feckless stretches of the presidency people have even suggested that Martin Sheen, who played Bartlet, should give it a whirl for real. Mr. Sheen has heard the cry of the people and is in the midst of a 55-day cross-country bus campaign. But it’s to persuade his supporters to go out and see “The Way,” his new film, which was directed by his son Emilio Estevez.

Three days into the trip, with the father-son duo hosting screenings and participating in Q. and A.’s, Mr. Estevez was asked by phone to pinpoint their location. “I have no idea,” he said. He called out to his father. No clue either. But so far all is well. “We have not been at each other’s throats yet,” he said. “And the people who are seeing the movie seem to love it.”

“The Way,” which opens on Oct. 7 in 15 cities across the country, traces the story of a father named Tom, played by Mr. Sheen, who travels to Saint- Jean-Pied-de-Port, France,  to retrieve the remains of his son (played by Mr. Estevez), who died while hiking in a storm in the Pyrenees and makes brief ghostly appearances. Tom, a recently widowed ophthalmologist whose life has been hemmed in by convention, ends up on a very different sort of journey, walking the 500-mile pilgrimage, which ends in Spain, called the Camino Santiago.
Along the way Tom discovers that a son who seemed to be wasting his life may have been living a grand one after all.

Mr. Estevez, 49, and Mr. Sheen, 71, have made other films together  — “The War at Home” and “Bobby”  —  but their joint commitment to “The Way” borders on fanaticism. They live about “200 yards apart” in the north part of Malibu, Mr. Estevez said, and usually see each other almost every day (even before the tour).

And in their younger days, both of them did a tour of the dark side. While Mr. Sheen, then an alcoholic, was losing his marbles making “Apocalypse Now” in the Philippines, Mr. Estevez was 14, roaming around with his buddies drinking in Manila while it was under martial law. Mr. Sheen suffered a minor heart attack a year into the shoot, sobered up, and became deeply involved in the Catholic faith he was brought up in by his Irish mother and Spanish father. Mr. Sheen has worked steadily ever since, playing an actual president — John F. Kennedy — in a mini-series along the way. In the 1980s Mr. Estevez dove into acting (he was a member of the so-called Brat Pack),and had big roles in “The Outsiders,” “The Breakfast Club” and ”St. Elmo’s Fire.”

The Sheens are, in a way, that family down the street that has bigger highs and more remarkable lows than the rest of us. They crack wise and fall hard but make no apologies for their foibles. We pity them and envy them by turns but never doubt their humanity.

“The Way” also brings to mind another family relationship. With the themes of a lost son and an anguished father, it’s not hard to discern a metaphor for what Mr. Sheen has gone through with his son Charlie Sheen, who was making a spectacle of himself during the filming of “The Way.”

Speaking by phone on the bus Mr. Sheen emphasized that the film is a product of Mr. Estevez’s vision as a writer and director, but acknowledged that the audience might think of his brother’s very public battle with his own demons. Mr. Estevez agreed that “our family context will be on people’s minds,” adding, “Charlie saw an early cut and was very complimentary.”

Mr. Sheen said that Charlie has been in better touch lately and “shows signs of turning a corner.”

“He is not there yet, but all you can do is stand out there with the lamp and hope that he can see through the darkness,” he said. He and Charlie recently did a skit together for Charlie’s celebrity roast, which will be shown Monday on Comedy Central.

The spark for “The Way” arrived after Mr. Sheen took a trip to Galicia, Spain, with Mr. Estevez’s son, Taylor, in 2003. Rushed for time because of the shooting schedule for “The West Wing,” the pair, along with a longtime friend of Mr. Sheen’s, had a only a few weeks, not nearly long enough to do the Camino de Santiago, which ends in the Cathedral of Santiago de Compostela in northwestern Spain, where the bones of St. James are said to be buried. But it was long enough for Taylor to meet his future wife at one of the inns that serve the pilgrims. He now lives with her in Burgos, Spain. “The Camino took away my son and gave me a daughter,” Mr. Estevez said.

In the movie, when Tom is handed his son’s guidebook and backpack, he is so overcome by loss and a desire to understand his son that he sets out alone on the religious journey, which pilgrims have traversed for more than 1,000 years.

A crabby, impatient man, Tom meets and crankily befriends three fellow travelers, including a Dutchman (Yorick van Wageningen) with a big appetite for life, but very little in the way of direction; a wounded, chain-smoking woman from Canada (Deborah Kara Unger); and an Irishman with a ferocious case of writer’s block (James Nesbitt). Each member of the ad hoc tribe finds something he or she needs along the way.

“I think the movie reminds us that we each have to embrace our brokenness,” Mr. Sheen said. “We live at a time when we are supposedly supremely connected by technology, but I don’t see it. This is a film about very different people walking together who find a way to connect with each other.”

There are no gun fights, seductions or car crashes, which may explain why major Hollywood studios had little interest in the film. “When we first started trying to put together the funding for the film and struggling, I said to Emilio, ‘We are not going to not make this film just because Hollywood doesn’t seem interested,’ ” said David Alexanian, a producer on the film.

Given Hollywood’s fear of films with religious aspects, the filmmakers had to cobble together financing from a number of private investors. “We are doing the bus tour in part to try and make sure they get their money back,” Mr. Estevez said. The Producers Distribution Agency, an alternative company formed by John Sloss and Bert Walker that released “Exit Through the Gift Shop,” and ARC Entertainment, will release the film, with social-media and grass-roots outreach. Mr. Sloss said he believes that the film will appeal to a variety of people, like “the faith audiences, the specialty audiences, people who like travel and the outdoors, Martin’s audience and then a lot of people who are going to hear it’s just a good movie.”

Mr. Sheen and Mr. Estevez are making stops in the kind of places — Kansas City, Kan.; Detroit; and Sante Fe, N.M., among them — that the movie industry often ignores. The tour does include an extended stop in October in New York, where former President Bill Clinton will moderate a Q. and A. session.

Mr. Estevez said the bus trip had been fun so far, partly because Mr. Sheen’s garrulousness and interest in talking with seemingly everyone at their events are assets on the promotional campaign. But those qualities weren’t so helpful while making a movie on a tight shooting schedule during the rainy season in the mountains of Spain.

“I had to keep reminding Martin that his character was not a friendly man, that he was suspicious of people, because that is not his nature,” Mr. Estevez said.

Mr. Alexanian thought it was fascinating to watch the father and son work together. “Martin is a devout Catholic, and Emilio is still sort of exploring religion. And I think that creative tension worked well for the film,” he said. “Yes, it touches in a significant way on spiritual issues but is never preachy.”

Mr. Alexanian added that Mr. Sheen “set the tone for the whole crew.”

“We were doing a different location every day, so it was grueling, but you have this 71-year-old guy who was marching through the Pyrenees day after day. He is a rock.”

Nice endorsement, suggesting that Mr. Sheen has the kind of material that might make for a good political leader.

“Well, we’ve already tried a former actor as president and another as governor of California, and that didn’t work out so well,” said Mr. Sheen, an ardent supporter of liberal political causes. “I think I will stick to campaigning for Emilio’s movie. It’s a much easier sell.”