Becca and Brian from outdoor clothing specialists, 53 Degrees North give us their informative review of the Camino Ingles route that they embarked on earlier this year. This is a great route if you are looking to for a challenge. You will have the chance to visit some charming towns and see vast green countryside along the way. Read their story here: 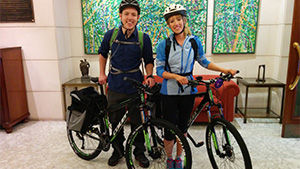 Excitement rose in our bellies as we collected our new Atmos and Aura 50L Osprey rucksacks which lay waiting for us on the baggage belt in Santiago Airport, Spain. Stepping through the glass doors, a representative, who was organised by CaminoWays.com, was waiting for us. She stood bearing a sign with our team leader’s name. The comfortable car journey from the airport in Santiago to Ferrol, lasted just a little over an hour. We arrived at our hotel El Suizo to find our brand new bikes had already been delivered and were waiting to be assembled. It took less than ten minutes to put the pedals on, adjust the saddle height and align the handlebars. After an early start, it was time to find somewhere we could enjoy the local cuisine. Our hotel receptionist recommended a small tapas restaurant. After we had our share of Spanish dishes and wine it was time to settle ourselves in bed before our adventure along the Camino began.

On Wednesday morning, we set off with our guidebook and pilgrim passports. Our chosen route was the Camino Ingles. This brought us along the trail leading from Ferrol into Santiago de Compostela. Cycling down to the harbour, based not ten minutes from our hotel, we collected the first stamps for our pilgrim passports. Once we were clear of the busy town of Ferrol, Brian and I followed the route mapped out by yellow arrows and shells along bike paths through parks and along the coast. The rain was pouring down but nothing could dampen our spirits today. The morning started out easy enough with most of it being flat ground. We passed through parks and beaches. At times we lost sight of yellow arrows and shells, however there are a collection of churches that ensured us we were still on the right track.

At 3pm, our stomachs started to growl as we had exerted most of our morning energy. We stopped off in a small town called Neda for a bite to eat.

Refuelled and back on the bikes we carried on to Pontedeume. Here, you’ll find a variety of facilities. Albergues, restaurants, bars. Unfortunately we had no time to stop here as it was reaching 6pm and we had yet to arrive at our pre-booked hotel for the night. Once we reached Pontedeume we had to say goodbye to the beaches, parks and coastline. It was a steep cycle through the hillside, before we could speed downhill into the town of Betanzos. Arriving at 9pm, we decided to get a good rest and explore the town tomorrow.

Back in the saddle 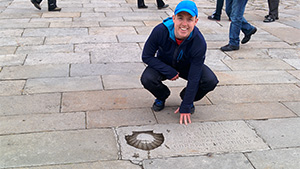 Thursday morning saw us spend a short amount of time in the town of Betanzos. We mingled with the locals as they set up food stalls outside the Church of Santo Domingo. Keeping the church to our left we headed uphill and out of the town. Soon we found ourselves cycling along dirt tracks through forests of green, yellow and auburn. After leaving the forest trail we climbed higher and higher, up steeper and steeper hills until we found ourselves at the top of a mountain looking down over breathtaking views. It was twenty degrees out and the sun was sweltering. It glistened over the brilliantly blue sea and brought to life all the forests and fields that were soaked in the previous days’ thunderstorm.

Another full day in the saddle climbing up hilll and then tumbling downhill meant we were shattered by the time we reached Sigüeiro. Weakened and tired we knew we had no choice but to carry on. Stopping to ask a local for directions to our next hotel we believed it was only another 2km to go. Unsure of what 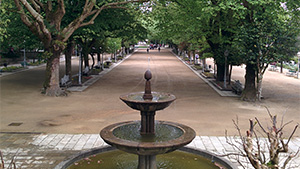 directions we had been given, Brian and I decided to consult the directions we had been supplied with. These were to follow the Camino route onto the next hotel. 10km later we realised we had to have gone past it. Even though the past 10km had been forest area. We arrived in an industrial estate called “do Tambre’. It was starting to get dark and Brian’s peddle had snapped off his bike. It was time to call the CaminoWays.com emergency line. Help was sent to us in the shape of a taxi which brought us and our bikes back to our hotel: San Vicente.

Feeling Tyred
On our final day we didn’t have as far to go. We had already covered the first 10km of today’s cycle last night by accident so we knew the route and could cover it in a faster time. Finding ourselves once again in ‘Do Tambre’, it was pretty much a straight road into Santiago. As we arrived into the town square facing the Cathedral we jumped off our bikes delighted and relieved to have completed the Camino Inglés. It was time for some food and a well deserved glass of wine. 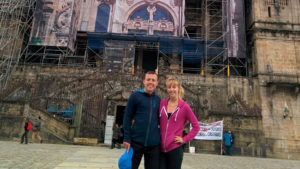 The route we took was a tough one. It was physically enduring because we had to cover a lot of uphill area. Cycling for 50-60km each day was physically and mentally challenging. Brian and I did this route in two stages a day, however one stage is probably enough to enable one to fully appreciate the way of St James.

If you would like to learn more about the route on the Camino Inglés, the English Way Camino route that Brian and Becca completed and other CaminoWays.com walking and cycling tours please contact one of our travel specialists.