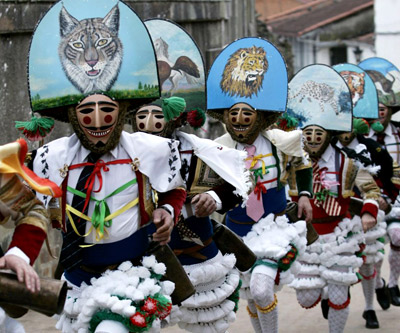 Still thinking of reasons to take a Camino holiday in 2014? CaminoWays.com, the walking and cycling holiday specialists, have compiled a selection of the 10 most unique camino festivals taking place along the Camino during 2014.

From street concerts and bull running to horse racing and grape harvesting – the Camino offers something for everyone to enjoy.

See below for the CaminoWays.com team’s top 10 festivals for 2014:

The tiny village of Laza in Ourense, along the Via de la Plata, is home to one of the oldest carnival festivals (Entroido) in the world. Men dress up in elaborate outfits, covering their faces with hand painted carved wood masks and run around the town ringing cow bells. A flour battle between the locals is a must-see in Laza’s famous carnival. Plenty of sweet treats and pork dishes are also an important part of the celebrations. Experience some fun with flour from €569pps for 6 nights.

The cities of Seville (starting point of the Via de la Plata) and Ferrol (starting point of the English Way) host some of the most important Holy Week and Easter celebrations in Spain. From Palm Sunday to Easter Sunday, colourful processions re-enacting the life and Passion of Christ take place nearly every day, parading important sculptures and figures of saints around town. Visit Seville from €569pp for 6 nights, or Ferrol from €539pps for 6 nights.

Where: Ferrol on the English Way or Seville on the Via de la Plata

Corsa dei Ceri, Race of the Candles, takes place in the Italian town of Gubbio, on the St Francis Way in Italy. Teams of men carry giant ‘ceri’ (wooden poles) with a figure of a saint on top, and race through the streets of Gubbio to reach the St Ubaldo basilica. The race winner will be the team that has shown the best skills. Be part of the action from €799pps for 8 nights.

Where: Gubbio, Italy, Section 2 of the Saint Francis Way

Fireworks, grilled sardines, dancing and street concerts – all in the spectacular setting of Porto’s UNESCO riverfront. São João is Porto’s biggest, liveliest and happiest festival, celebrating the beginning of Summer. Hitting people on the head with garlic flowers is also considered part of the fun. Join in the madness from €649pps for 7 nights.

Where: Porto, Portugal, Section 4 of the Portuguese Way

Pamplona’s world famous running of the bulls, San Fermín, has amazed visitors for centuries, including writer Ernest Hemingway. Running in front of the bulls is not for the faint-hearted but the festival is a must-see along the Camino. Witness this world famous event from €399pps for 5 nights.

Where: Pamplona, Sections 1 and 2 of the French Way route of the Camino de Santiago 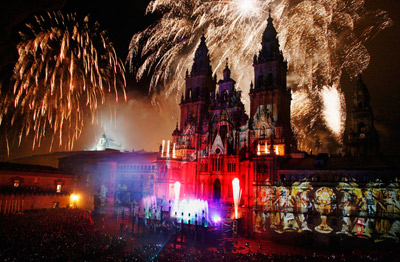 25th July marks Saint James Day so it is fair to say it is the most important festivity along the Camino de Santiago. It is also Galicia’s Day. For a whole week, the city of Santiago de Compostela honours its patron saint with concerts, cultural events, fireworks and plenty of ‘tarta de Santiago’, Santiago’s almond cake. Celebrate with the locals from €489pps for 6 nights.

Where: Siena, Tuscany, Italy. Section 14 of the Via Francigena

Where: Logroño, Section 2 and 3 of the French Way route of the Camino de Santiago

Originally an agricultural fair, San Froilán is one of Galicia’s best loved festivals. Today, San Froilán has little to do with agriculture and plenty of entertainment for all ages. A must-do at San Froilán is tasting Galicia’s most classic dish – ‘octopus fair-style’- at the octopus tents located in the town park for the duration of the festival. Expand your taste buds from €599pps for 6 nights.

Where: Lugo, on section 2 of the Original Way route of the Camino de Santiago

The stunning hilltop town of San Miniato hosts the most famous white truffle festival in Italy each November attracting foodies from all over the world looking to indulge in some of the best white truffle dishes. Embrace your inner foodie from €599pps for 6 nights.

Where: Section 14 of the Via Francigena

When and price: Self-guided holidays on the Camino de Santiago and the Via Francigena are available all year round. Guided tours are also available from March until November (fixed departure dates).

Price includes: Accommodation (half board basis), luggage transfers from hotel to hotel and a holiday pack.

Price does not include: Travel insurance, flights, airport transfers (optional).

Also available: Ask the CaminoWays.com team about the Superior Collection – the best hotels on the Camino.